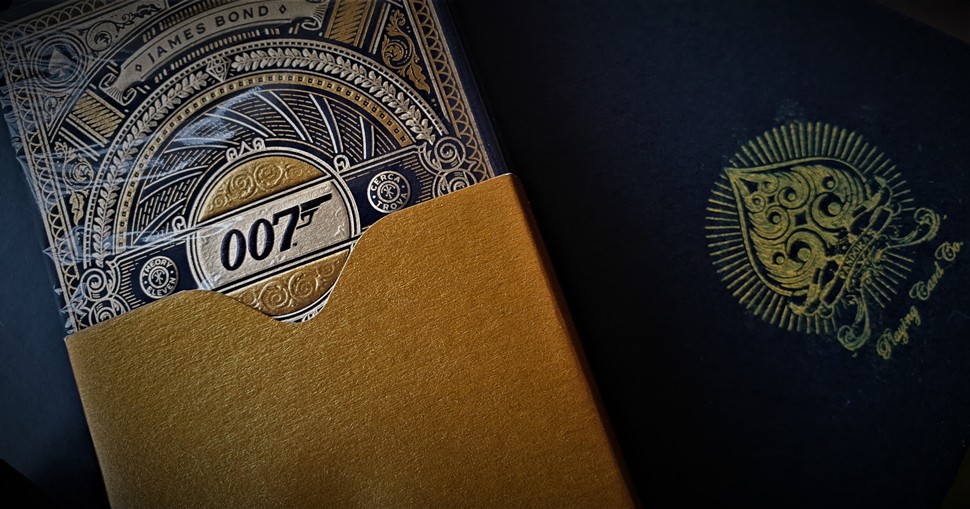 These Premium playing cards, by theory11 are inspired by the legendary film series.

In celebration of the 25th installment in the beloved James Bond film - "No Time To Die" - theory11 proudly presents James Bond 007 Playing Cards.

Elegance, Class, and Sophistication are the hallmarks of the world of 007

Whether it’s his perfectly tailored suit or the impeccable timepiece clasped to his wrist, Mr. Bond commands your attention when he enters the room.

Perfectly encapsulated in gold foil and embossed accents, the ultra-lux outer packaging is truly representative of the esteemed intelligence officer.

THE ACES. THE JOKERS. THE KINGS.

James Bond Playing Cards feature completely custom artwork in every aspect of the design, with the Ace of Spades, Joker, tuck box design, and court cards inspired by iconic Bond films over the past 60 years!

A closer look inside will reveal several iconic weapons and gadgets that have been featured in your favorite Bond films:

The pen grenade from GoldenEye, Bond’s trusty Walther PPK, the ski pole gun from The Spy Who Loved Me, Jinx’s knife from Die Another Day, and much more!

The back design of 007 Playing Cards features the Bond family crest and his family motto: Orbis Non Sufficit.

World renowned playing card company theory11, has collaborated with some of the world's leading brands to produce the most sought-after playing cards.

Their 007 James Bond themed playing cards are amongst the best yet!

Expertly handcrafted, made is ITALY.

Our playing card box is designed and sourced from Italy.

Made from a real peice of natural wood.

The tuck box, is beautifully etched with our company logo and with intricate scroll work throughout the internal box, as well as the external jacket.

This is a one of a kind tuck box, that will hold your playing card deck, perfectly.

Made to last and stand out, it is a real piece of craftsmanship!

As our picture demonstrates, your playing card deck fits in perfectly, abit like a well tailored suit!

Pandora's Box, is a keep safe box, designed to last for years not weeks.

It looks great on a work desk or a display cabinet at home.

PPCC. has developed an in-house signature wrapping solution for your luxury playing cards.

The concept is simple yet elegent and is designed to keep the tuck case in as good a condition as possible.

Finally, we house your gift set into our smooth signature black box, sourced from a UK supplier.

A vintage looking "certificate of authenticity" is carefully stamped out and placed in the box as a testiment, that we take great pride in being a UK based Company.

All aspects of cutting, is done in-house and all our logo's etc. are produced from custom made stamps, sourced in the UK.

The outer box is wrapped with a delicate yet sturdy thread, the finish look is both subtle and complimentary.

When we delivey your gift set, our packaging team will wrap your parcel in a protective sleeve and then into a sturdy cardboard box.

All our deliveries go out recorded delivery and signed for.

Each gift set is signed and dated by hand to give you the assurance that we handcraft your gift set, for you to enjoy.

To buy the James Bond 007 Playing card Gift Set, please use the link below:

Your gift set will include the following:

Custom wrapping for both card deck and Pandora's box

Disclaimer:  Please note, all our gift sets are under continuous improvements.